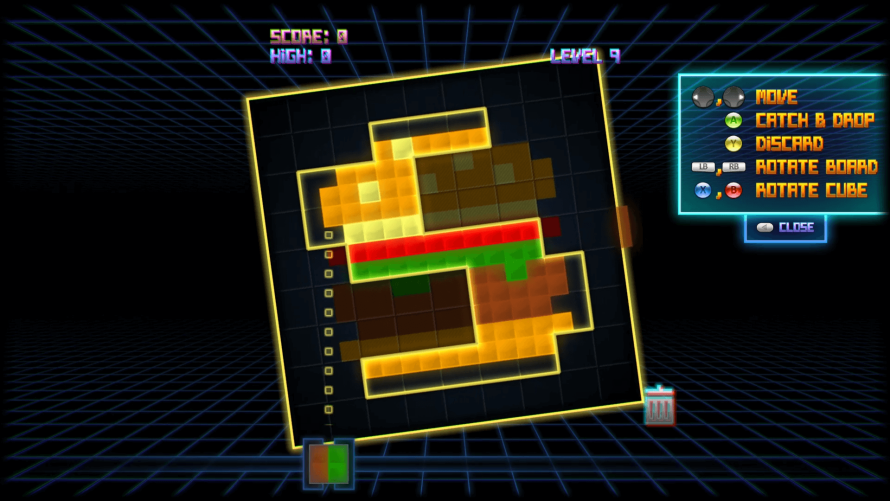 One by one, colored cubes appeared, waiting for me to blast them into their rightful place, recreating what was once a groovy picture. From burgers to watermelons and even a sword was on the list of broken items that only careful blocky color manipulation would be able to restore. And only with proper fast reflexes might one be able to accomplish this goal, before… the time was up. Because the clock’s (almost) always ticking, in Cubotrox.

In order to pull off this particular feat of cube blasting construction, you’re given control over a tiny cube grabber, capable of rotating not only cubes but the entire board too. That last bit is handier than one might initially think, seeing how you simply won’t be able to reach every part of the ‘puzzle’ without spinning around from time to time. Same goes for the cubes themselves, as colors have to line up with where they’re going to progress the level. You can always grab misplaced ones later, should the need arise -- another undeniably useful inclusion.

Now, alpha demo being alpha, what is available here is very much a work in progress. Still plenty to see and do, though, including both time attack and move limited levels -- some of which are pretty darn tricky, I might add! Oh, and with the full version set to feature “hundreds of levels”, an “endless mode”, collectible boosters/bonuses (source), among other things, an already fun game is only going to get better. I hope. Time will, as always, tell.

Cubotrox demo is available from itch.io, for Windows and OS X.