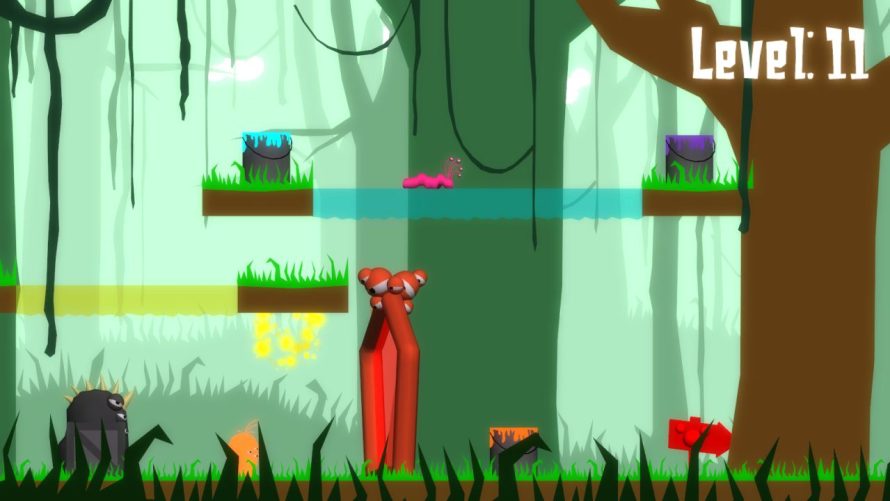 Games are often described as being colorful, although this tends to be based on appearance, not gameplay. In this one, it’s definitely the latter, as you’ll be mixing colors to alter your appearance and pull off all kinds of crazy.

Since the story hadn’t been implemented in the beta build I played, exactly why this little alien fella is wandering through the wilderness is unknown. Were I to wager a guess, however, I’d say he’s either lost or on a mission of exploration! Whatever the case, he’s certainly determined. No matter how many times I got him killed (not always by accident either), he simply reappeared a few seconds later, ready to go at it again.

In order to make it through each level, you’ll have to not only familiarize yourself with color mixing, but also make a mental note or two as you go along. You see, being able to hide in a purple cloud of smoke is great and all, except that’s not going to happen unless… you’re also purple! Colored doorways also hinder your progress, with the same requirement for passage. Early on, neither pose much of a challenge as the proper paint bucket usually resides somewhere in the current level. But sooner or later, you’ll find yourself needing to revisit earlier stages in search of the proper color, and it’s at this point that both the difficulty and (to a point) fun ramps up.

Let’s say you need to get past an orange doorway, but the only colors at your disposal are red and blue. Since combining those two makes purple, that’s not exactly helpful. In order to overcome this obstacle, you’ll have to backtrack in search of a yellow paint bucket, and then… travel all the way back to the doorway. A process made less tedious by each level being rather short, but tedious nonetheless. That said, I have a feeling the game might be too easy otherwise, seeing how it’s not really a complicated affair. Aside from remembering which colors you need to move things along, at least. 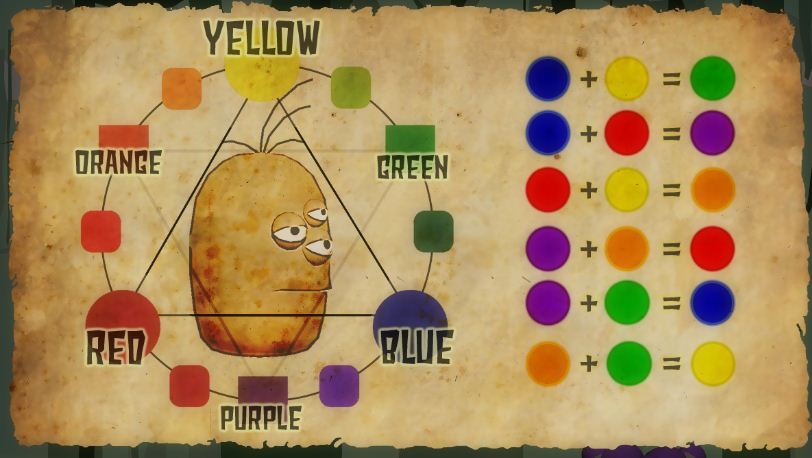 Coated does have an in-game ‘color wheel’ to help those who with a bad memory, though. This proved quite useful when I had to juggle more than a few colors while traveling between several different areas to find them. Oh, and there are also portals (sciencey gateways)! These are mostly used to access just-out-of-reach platforms, and follow the same rule as every other colored obstacle: nothing’s going to happen unless you match its color.

Everything in Coated’s world depends on colors. You can coat yourself and merge, multiply & subtract colors to get a certain color. You can interact with most of the environment’s objects by colors too.

Now, this is where I’d normally tell you to go play it, but there’s no public demo of Coated, as of yet. In an odd twist, the developer decided to base the decision of whether to make one available, on Greenlight votes. Not sure what that’s all about. Surely, the more people play your game, the better your chances are of getting the word out there? Especially considering how competitive Valve’s ‘screening process’ is. Well, that makes this last bit even more important: remember, your vote matters!