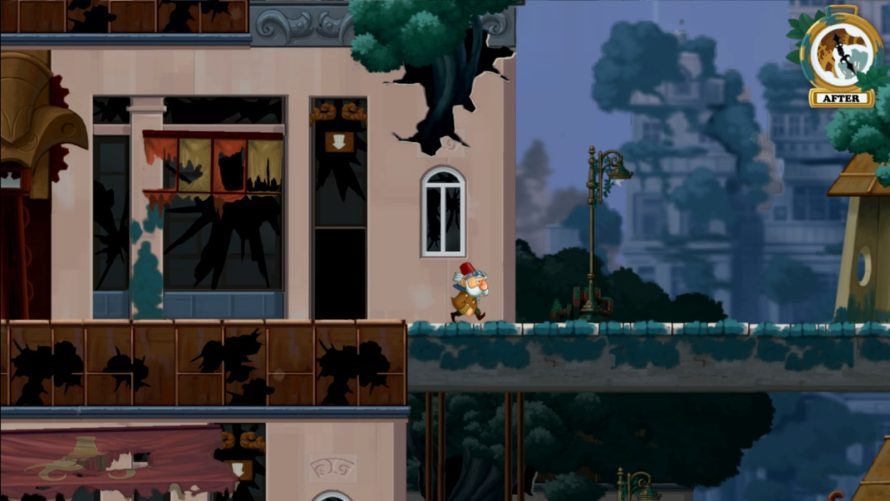 As history has proven time and time again, amazing things can happen when science is involved, but due to the greed of man, the exact opposite is also a likely scenario. In Chronology, it’s unfortunately a case of the latter, as an uncanny quest for power has resulted in the end of the world! That’s the bad news. The good news is that… you’re able to manipulate time. Because, what could possibly go wrong?

Now, unlike in games like Braid, here, that particular ability doesn’t actually let you rewind time, as it were. Instead, you’re able to instantly jump between ‘before’ and ‘after’, which is something you’ll be doing a lot to solve various puzzles, as the differences between the two are easily noticeable. Well, apart from the fact that ‘after’ is a much darker, broken down version of ‘before’, of course.

A fun mechanic for sure, if a bit simple, although courtesy of a rather uncanny traveling companion (the snail), you can actually pause time itself! Yup. Combine the two, and you’ve got some serious puzzle platforming potential. Shame it’s never fully explored though, because aside from the last few levels, the game rarely had me stumped, trying to figure out what to do next. 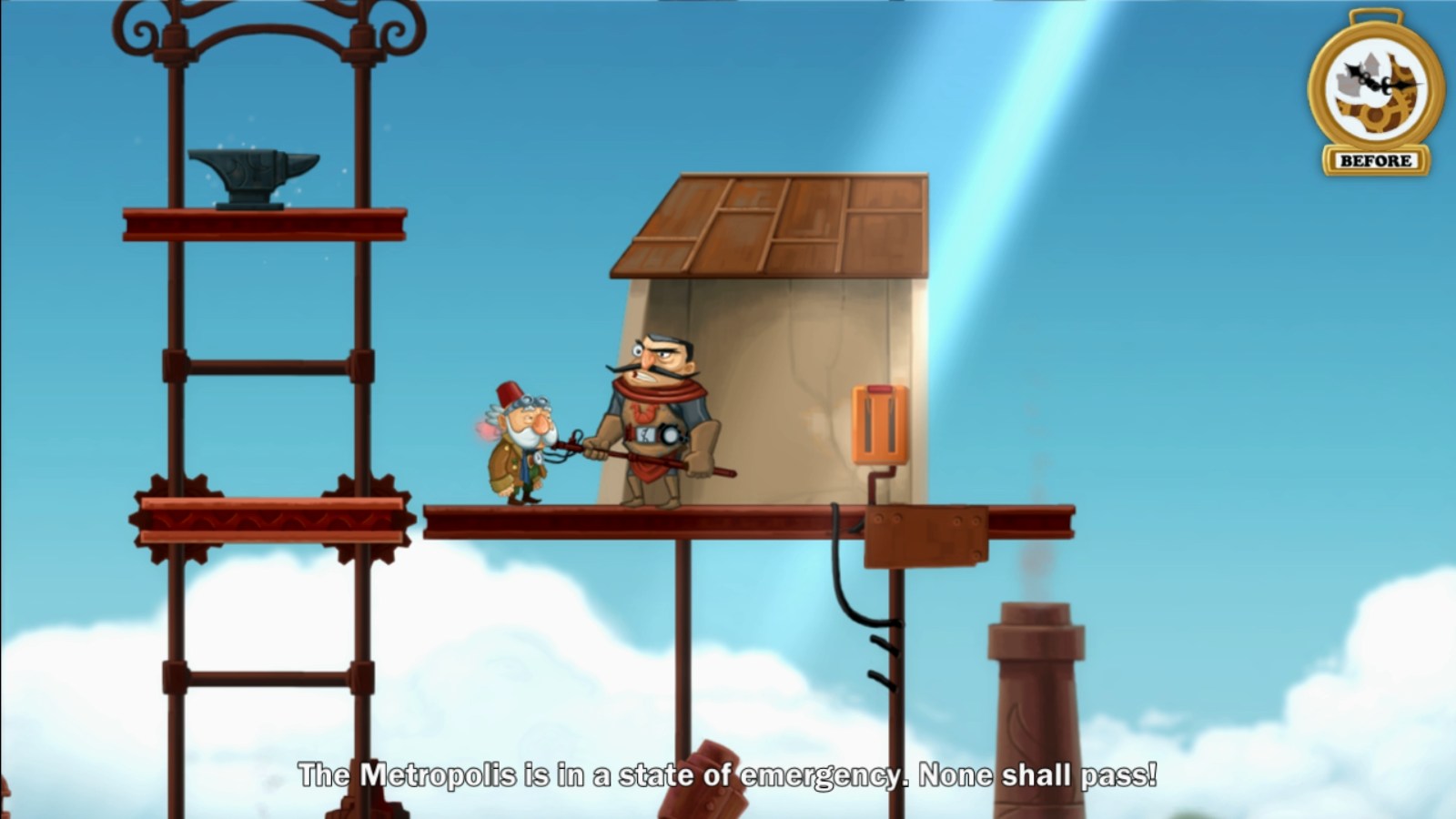 Then again, perhaps that’s not as bad as it sounds? It did mean the flow was rarely interrupted, allowing the game to keep a steady pace throughout. Heck, not even death was much of a setback, seeing how I’d instantly reappear a few seconds back, unharmed and unfazed. Oh, the snail? Yeah, that thing’s pretty much impossible to kill -- it just kept going, creeping along any surface. Peculiar creatures, them snails.

Speaking of which, while death was a rather uncommon occurrence in Chronology, I did manage to get the poor scientist killed every so often. Spinning saw blades, toxic waste, heck, even something as potentially non-lethal as water -- all deadly to the touch. Guess no one taught this old man how to swim, eh? Or maybe he was just too busy burying his head in books.

Whatever the case, you’re able to switch between the protagonist and his snail companion at (almost) any given time, and believe me, you’ll be doing that a lot. The snail may be able to slither along most surfaces, but given its lack of arms, picking up items and/or pulling switches are impossible tasks. That fancy shell does make for a great platform extension though, among other things.

On the topic of manipulating the environment, pulling switches, pushing blocks and puzzles in general, as I mentioned earlier, these are mostly of the simplistic sort. A few did stand out, however, like the one involving a game of ‘hide-and-seek’ or the one with a seemingly impassable door, as both required several steps, including the use of every last ability. Complex and tricky for sure, but still fun. The ones more about jumping back and forth in time, on the other hand -- not so much. 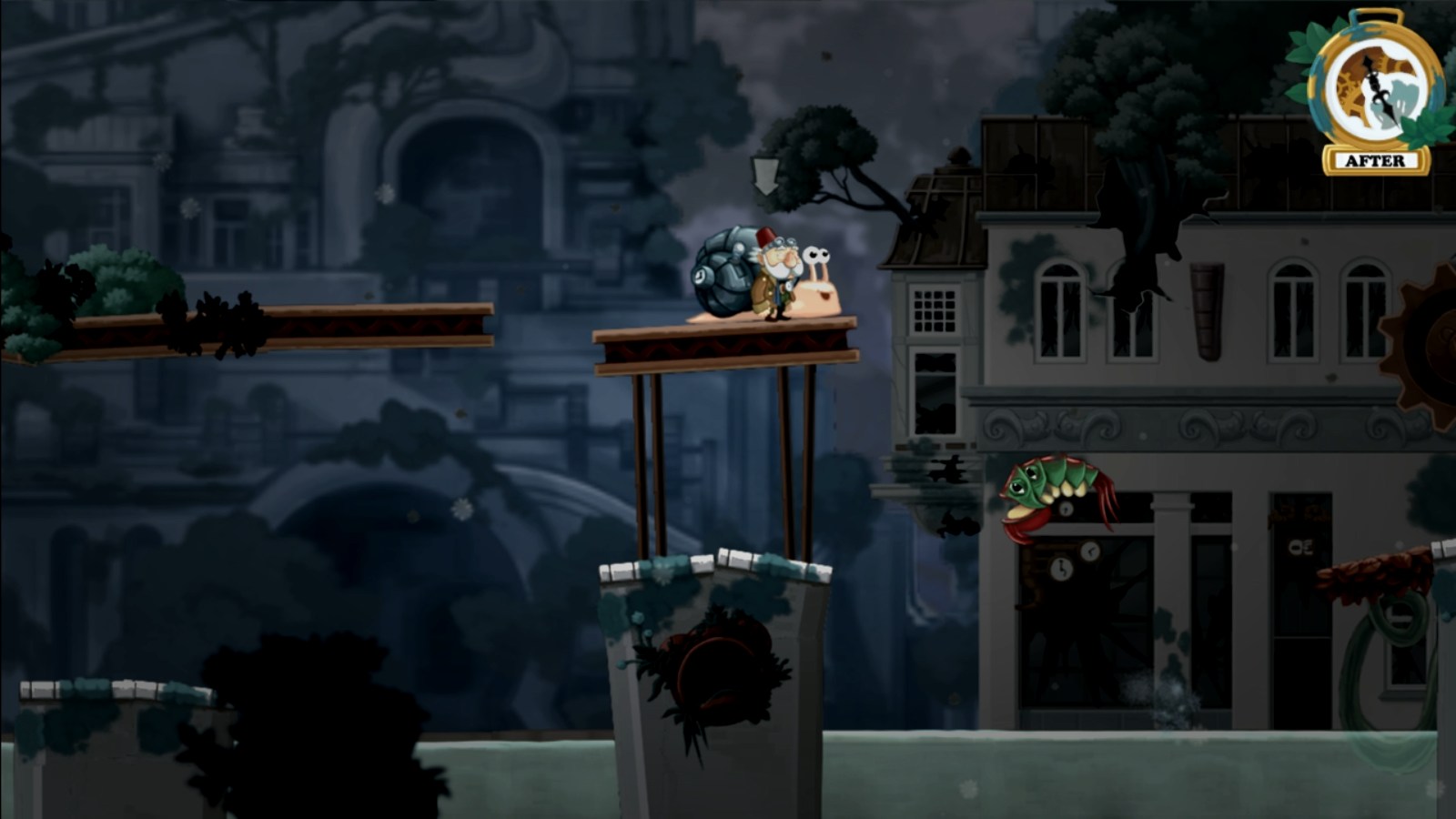 In spite of that, even during moments of less-than-stellar puzzles, I never found myself to be downright bored. Maybe the combination of its vibrant visual style and moody music had something to do with that? Maybe. But I suspect the story also played its part (get it?), clichés and everything, as I was always eager to see what lied ahead… or before. Right. You know what I mean!

While it may not sound like it, in spite of some minor hiccups, I definitely enjoyed playing through Chronology. Say what you want about other 2D platformers, but with its interesting twist on time travel/manipulation, logical puzzles, stylish visuals, and solid level design, this one’s the complete package. I mean, sure, some would probably find it on the short side, clocking in at around 2-3 hours. Me, I say it’s just the right length! Besides, were it even a level or two longer, they’d likely have dragged the story for no reason. As it stands, totally worth the admission fee and highly recommended.

Chronology is available for Windows from Steam, priced at ($4.99 until June 30th!), and its soundtrack can be acquired from Bandcamp, priced at $3. For science? FOR SCIENCE!