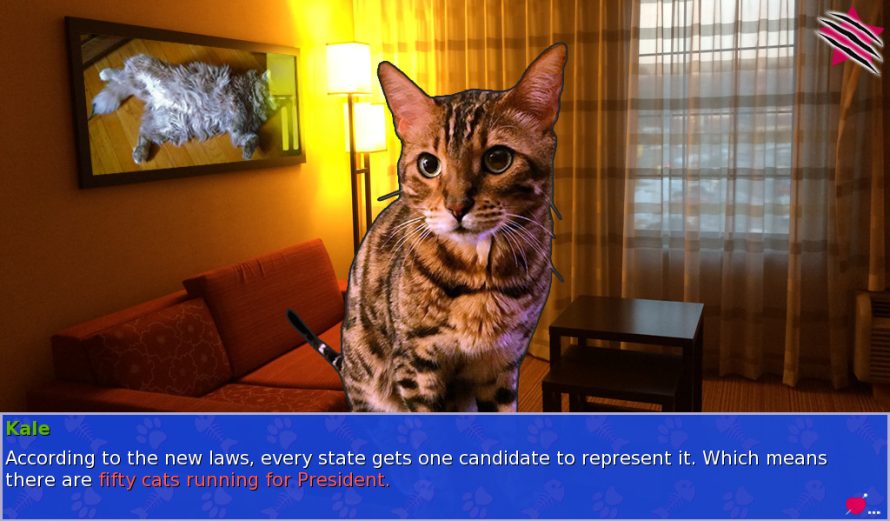 The world’s gone completely nuts in Cat President ~A More Purrfect Union~. Cats are running the U.S. government, pigs are flying and The Mets actually won a game. Alright so only that first bit is true, but the world’s still gone nuts. At least the way I see it, and as for you, the protagonist -- well, you’re just an ordinary teenage girl, living in a lonely world, and so on. Oh, and you’re unemployed, straight out of college. So… cue feline presidential candidates?

I know what you’re thinking, and you’re right: cats and politics don’t mix. They do make for one helluva silly visual novel though, which is exactly what Cat President ~A More Purrfect Union~ is. Plus, I’m willing to bet that these guys to do a better job than those running the U.S. government in the real world, any day of the week. Meow.

Right. Anyway, thing is, you need a job and a bunch of cats needs your help with a presidential campaign. Weird? A bit, but at least they’ve seemingly mastered the English language… somehow. Yeah. Let’s just move on to the matter at hand, which is that darn political campaign. Which may or may not lead to another ‘purrfect union’, if you catch my drift. Spoiler? Heck no. Ain’t saying anything the game description doesn’t already, so there.

As for exactly what triggered this crazy chain of events, well, you’ll just have to play the game and find out. I will say this (again) though: cats and politics don’t mix. They really don’t. Even if a cat’s the only cat who knows where it’s at. That said, it’s a premise so silly, it just might meo-- I mean, work. Oh boy.

Cat President ~A More Purrfect Union~ is available from Steam and itch.io, at $8.99.