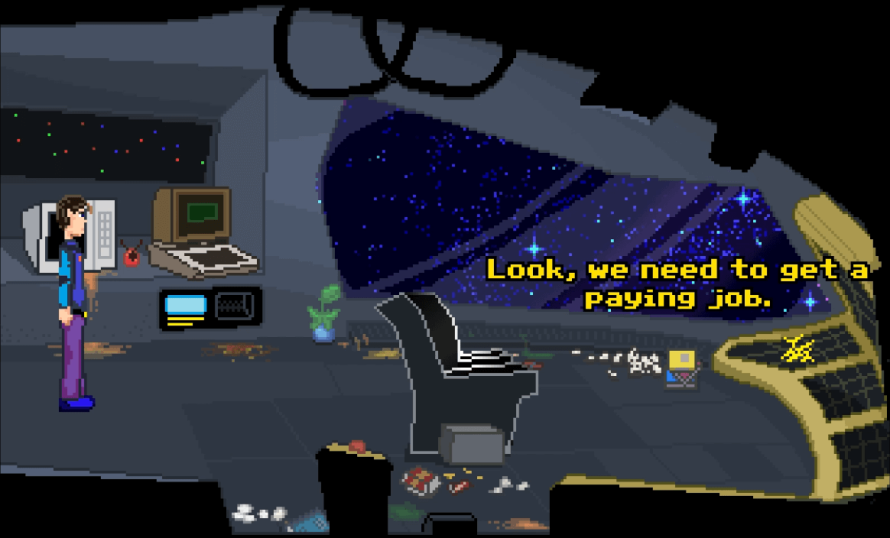 Captain Disaster is down on his luck, big time. His ship is in shambles, its computer badly in need of an update, and really, a haircut wouldn’t hurt. Although as fate would have it, he’s broke, which means… it’s time to get a job. So he takes on a deceptively simple package delivery. This is but the first of many mistakes, even if it is one that also kicks off Captain Disaster in: Death Has A Million Stomping Boots – an absolutely bonkers, dangerous, grand adventure!

Early on, everything’s just peachy and there was even time for our captain to take a nap in, well, the captain’s chair. Or rather… I made him do it. Because I was directly in control of this poor guy’s actions, over the course of the six or so hours it took to beat the game! Muahahahaha! Ahem. Right. Anyway, Delivery to make, payment to acquire, ship to repair, and so on.

At first glance, it might be hard to tell, but Captain Disaster in: Death Has A Million Stomping Boots is extremely nonsensical, overflowing with references to classic rock, video games, and cartoons, among other things. The game doesn’t shy away from mocking genre stables either. Some may consider this a negative, but not me. I honestly found it to be absolutely brilliant, through and through.

That’s not to say the entire thing revolves around comedy though, because… well, you did catch that bit about the danger in the first paragraph, right? See, that supposedly simple delivery quickly devolves into a lengthy affair when, upon arriving to acquire the object in question, complications arise. Normally, the language barrier wouldn’t have been an issue, as a translator machine thingie would make new arrivals capable to understand and speak any language. Unfortunately… Captain Disaster (what a great name) only got the ‘understand’ part before it broke. Oh, and to make matters worse, even random noises translate to something – who knows what – in the native tongue. So far so bad. 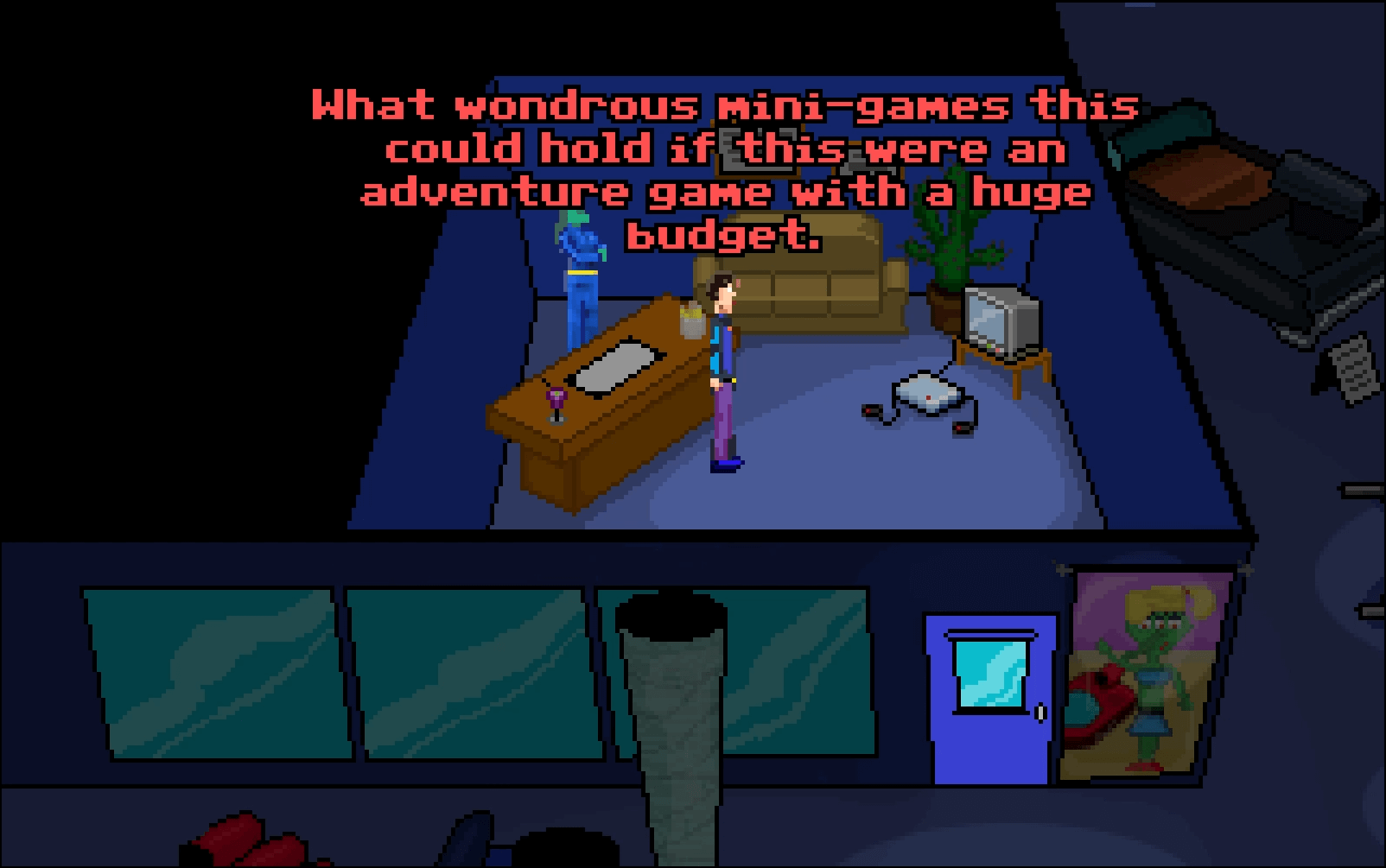 Unsurprisingly, this is just the first on a long list of things Captain Disaster will have to deal with before he’s even able to transport the package to his ship for delivery. Government officials and various locals – including a rather grumpy robot –  all play a part, however odd, in this little quest of his. On top of that, this being an alien planet and all, one would do well to take nothing at face value. Expect the unexpected, and if at first you don’t succeed, well, maybe you need to do something else before trying again. Such is the way of adventure games though, and this is one’s no different.

At least you’re able to go almost anywhere on the planet not long after landing, jumping from one locale to another in the blink of an eye (bless the developer for not making players walk long distances). Even if there are places you’re clearly not meant to visit until much later, it’s nice to have the option of doing so early on, as it makes the entire thing feel less sealed off – less like a game, I suppose. I mean, ‘invisible walls’ are still a thing; they’re just done properly here.

If not for the fact that Captain Disaster absolutely loves talking to himself, this whole openness might make some people’s heads spin with confusion. But the times when I had to resort to a walkthrough could be counted on one hand as figuring out where to go next was rarely a case of trial-and-error. There were moments of ‘okay, so that didn’t work, let’s try tweaking this and/or that’ however, but… those could just be a case of me being bad at puzzles. Hard to say, really. 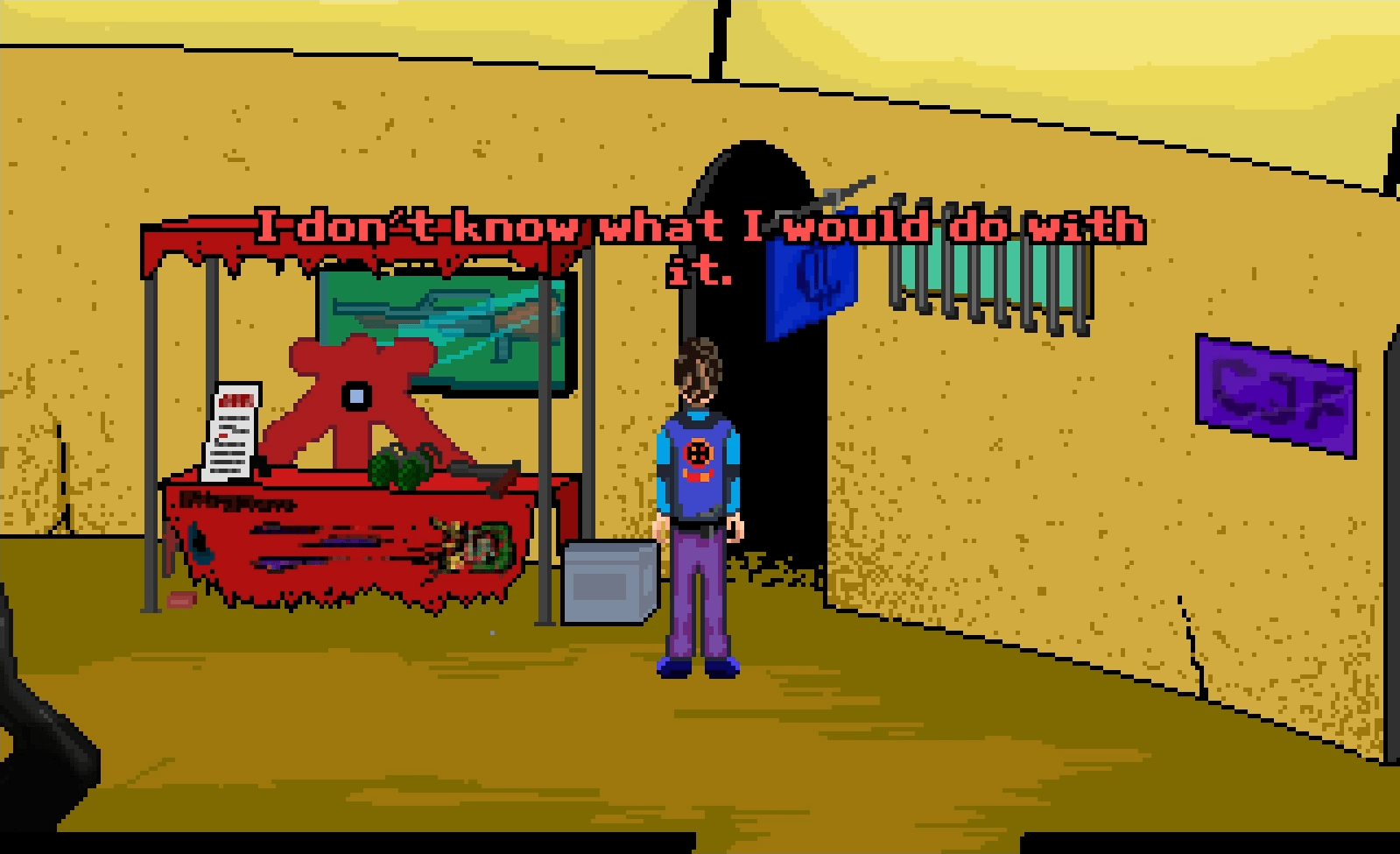 Whatever the case, I had fun, and that’s what matters most. So what if a few puzzles had me stumped? Since I was never put into an unwinnable scenario (suck it, King’s Quest V), such design is quite alright in my books, as different people are likely going to approach the game differently. Maybe someone else will get stuck where I simply breezed through, and vice versa. Heck, I’m sure there are even those out there who won’t get any of the references/jokes, which is a darn shame as most of them are quite groovy (woo, Twisted Sister!).

Besides, whenever I did find myself ever so slightly stuck, I simply wandered around and talked to everyone, clicked on everything, and so on. A bit silly, sure, although in this case, it paid off plenty as I was treated to witty dialogue and/or yet another reference. There were even times when those darn inventory puzzles reared their ugly head, requiring me to manipulate… well, objects in my pockets… somehow. You know the deal: look at A, use D on B to create E, or some such. Not an uncommon thing for this particular genre, although definitely not something I’m overly fond of.

As time went by, and our strikingly handsome (not really) protagonist progressed the plot, we both realized around the same time just what was happening, I’d say. I probably should have noticed sooner though, seeing how the game does start with a bit of foreshadowing in the form of a prologue cut-scene. Better late than never, right?

Well, it was actually pretty close to being too late, as it turns out, but… nothing the clumsy, fool-witted down-on-his-luck protagonist can’t fix. With a lot of luck and the aid of various seemingly unimportant characters, that is. A LOT of luck. Looking back on the adventure, I’d say chances are, luck probably played a noticeably larger part in the outcome than he’d ever be willing to admit. 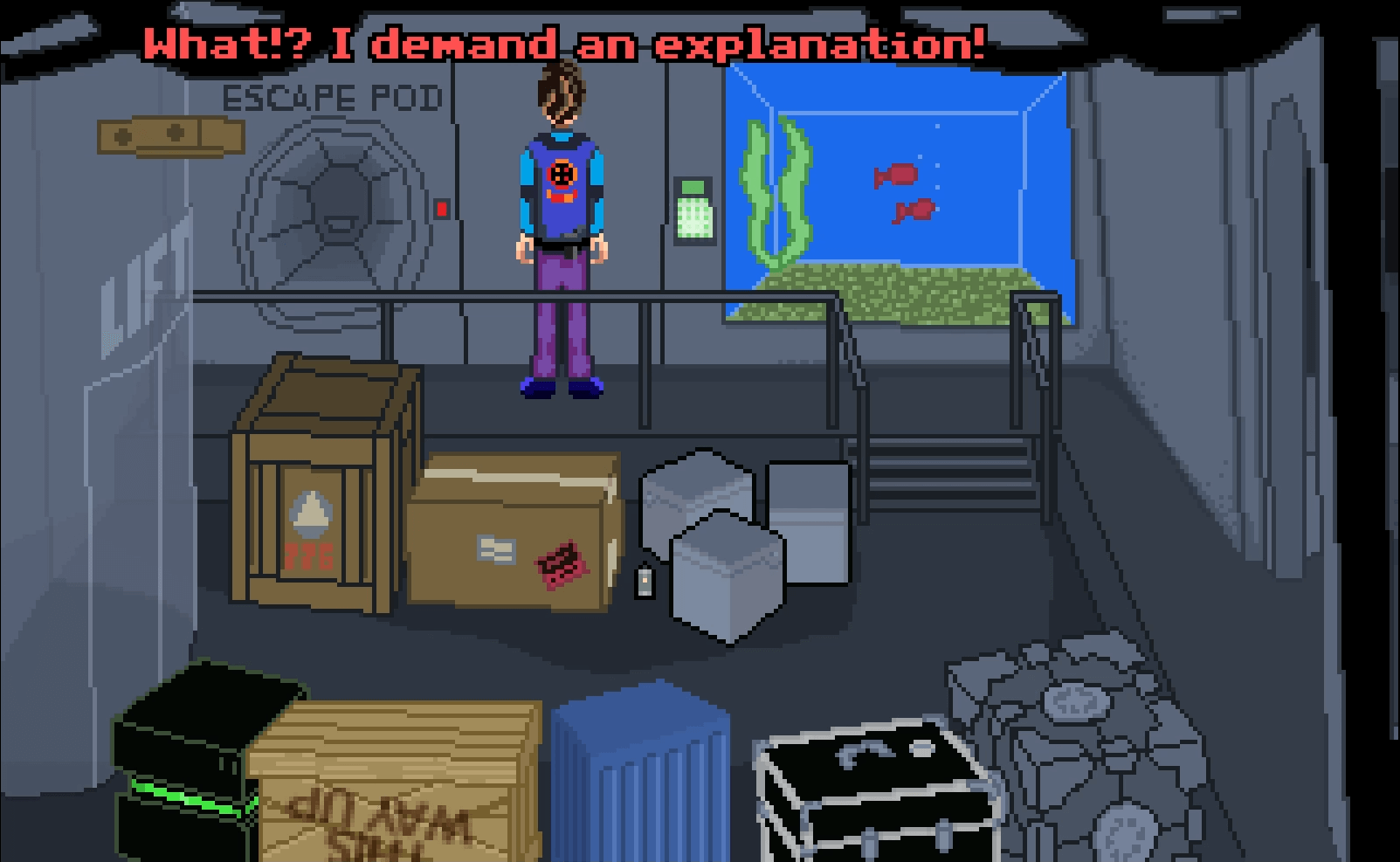 What a mission though. Funky music, varied locales, lovely pixel art, appropriately cheesy voice acting and a story full of twists and turns one simply has to experience to believe. Were I to simply tell the tale of what Captain Disaster in: Death Has A Million Stomping Boots experienced, chances are most would think me absolutely mad. And rightfully so, as you’ll see for yourself by picking up a copy of the game and playing through it. Which is something I would highly recommend – especially for fans of the genre – because of just how zany the entire thing is… in the best possible way. Long live Captain Disaster!