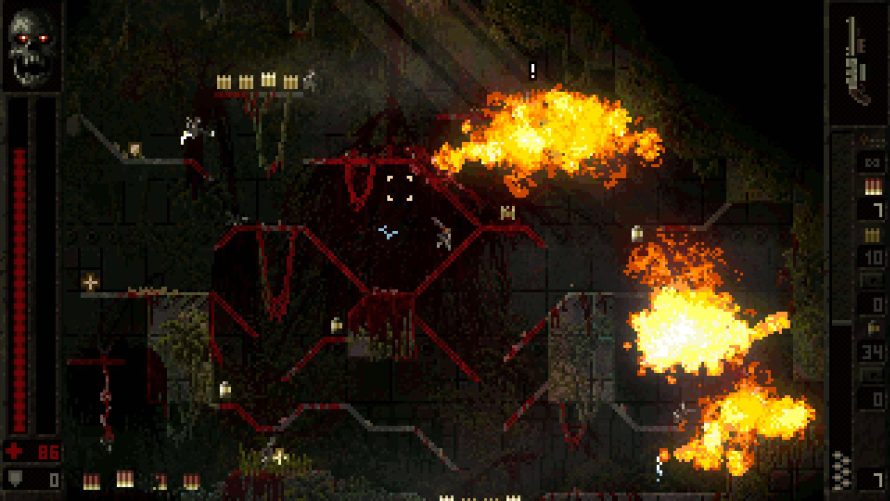 Violence, carnage, mayhem, pixels, gore, blood, dismemberment, chainsaws, and guns. Lots and lots of guns. That single, albeit lengthy, sentence pretty much sums up BUTCHER, in all its pixellated gory glory. Oh, and you don’t get to play as the good guy either. Nope. This time, you’re tasked with exterminating every last human being on Earth! There’s just one problem: they, like you, are armed to the teeth and more than capable of defending themselves…

Described by its creator as “a blood-soaked love letter to the early 90s”, BUTCHER brings the action at a pace few games have mustered. Also, being this particular cyborg protagonist is pretty darn difficult, in spite of packing a lovely arsenal -- from a chainsaw to a rocket launcher. Difficult, but not impossible, however ridiculous the odds may seem after getting cut in half by a trap for the umpteenth time.

If kicking corpses into a lava pit and adorning walls with blood is your idea of a good time, BUTCHER is THE game for you.

In fact, chances are we’ll see people speedrunning this game sooner rather than later, as -- again, according to its creator -- the entire thing is essentially a skill-based experience. Translation: get good or game over. That and traps in this place can’t tell friend from foe. May wanna keep that in mind, next time some bulky maniac decides to give chase. Ah, and best of all: you get to literally paint the town red… with the blood of your enemies! Woo! KABOOM!

BUTCHER is available from Steam and GOG.com, priced at $9.99.