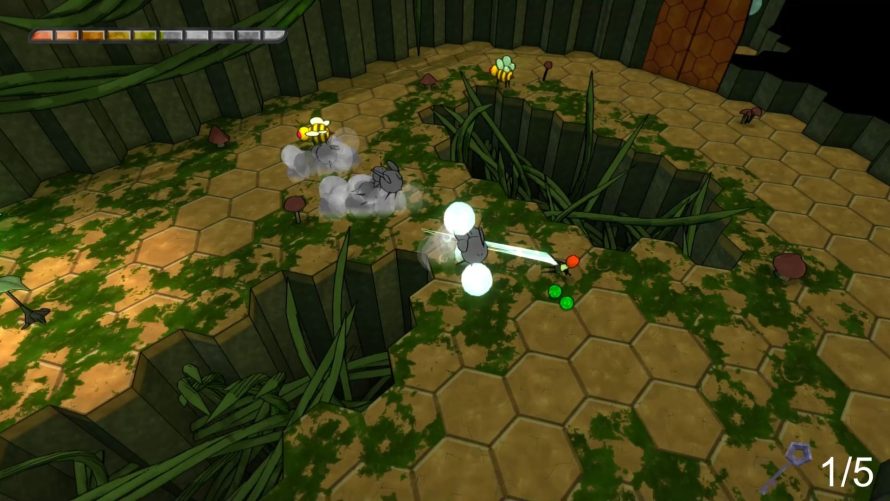 Much as I dislike bees, they’re hardly a major nuisance… in this world. See, in whatever alternate dimension Bees Won’t Exist takes place, they’re pretty much in charge. No one really knows how or why, but one day, giant bees simply appeared -- and the rest is history. Oh, and just in case you haven’t figured that part out already: you’ve been tasked with defeating these vile creatures. Bee the best that you can, and all that good stuff. Fight!

Exactly who the protagonist of this tale is, remains a mystery. He -- or she -- is certainly determined, though, and quite agile, dashing all over the place, smashing bees left and right. Might sound there’s some serious bullying/animal cruelty going on, but don’t forget, they started it. They’re the invading force -- we’re simply taking back what’s rightfully ours.

That’s how I see it anyway, based on what little information was gathered throughout the journey. Information, most of which wasn’t exactly super helpful, and some -- like that on oddly placed tablets -- almost seemed as if it came from a crazy person. Not that giant bees invading isn’t completely bonkers, mind you, but at least it was real, as confirmed by my blade slashing the darn things. And not just a few either.

From grassy hills to a hive and beyond (maybe…) this rather peculiar quest took me, dashing across gaps, flicking switches, fighting for my very life, determined to succeed. Determined to put an end to their evil reign, returning the world to what it once was. Because we all have our place, our reason for being -- and that of bees is definitely not ‘to rule humanity’, however much they like to think so, in Bees Won’t Exist. What say we teach them a lesson?