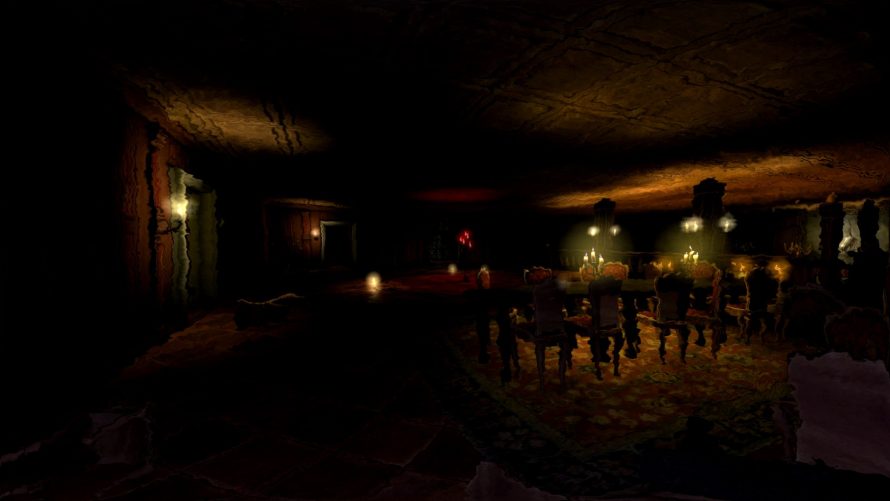 Why anyone would want to explore a mansion connected to horrifying tales is beyond me. Nevertheless, that’s exactly what the protagonist – let’s call him Jack – decides to do in The Call From Another Dimension. Besides, no guts, no glory, right? And for all Jack knows, those tales could easily be just that. (Yeah right!)

At first, I was inclined to agree with Jack, who immediately upon entering states that the mansion didn’t look so scary. At first. But then I did a bit of exploring and stumbled upon what resembled a ceremonial ritual of sorts, complete with lit candles and markings on the floor. Should have known right then and there to turn back, yet instead, I pressed onwards, until… well, not gonna spoil everything, ya know?

I will say this though: in terms of atmosphere and scripted events, this one’s definitely got it good. Jump scares happen when you least expect them (the best kind!) and there are even genuine cut-scenes, all of which helps keep the player on edge, start to finish. An undeniably uncanny story, albeit one that could have been slightly better, did it not use the rather typical ‘old mansion’ setting, but oh well.

Oh and of course, it wouldn’t be a proper Amnesia: The Dark Descent story without puzzles. While The Call From Another Dimension does pack a few of these, they aren’t exactly overly complex. A few well-timed jumps here and there along with an eye for detail will get you far for sure. That said, good luck keeping your wits about you while roaming through barely lit hallways, the floor creaking underneath your feet. Yeah. The floor.

Those brave enough to venture inside the mansion need only grab The Call From Another Dimension, along with a copy of Amnesia: The Dark Descent (patched to 1.2). Mod is free, while the game will set ya back an even $20.