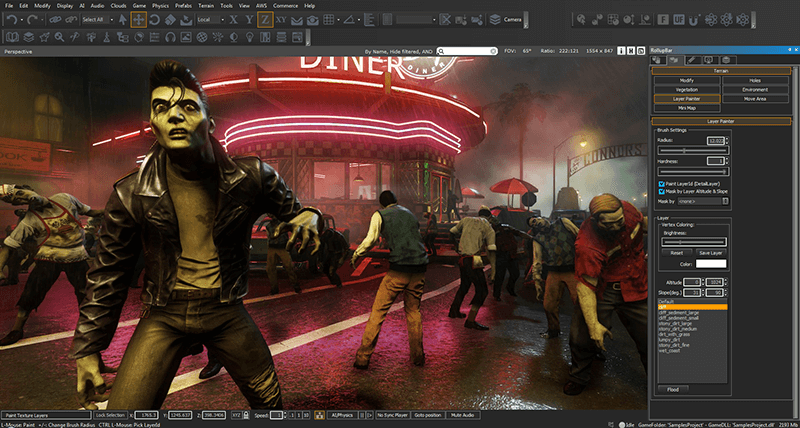 Nowadays, it’s easier than ever to get started on that first video game, given the wide variety of engines available. Some carry a price tag, other a subscription of sorts – Amazon’s Lumberyard? Neither. The darn thing is cross-platform too, complete with multiplayer functionality, and for curious minds, the C++ source is included. Very groovy.

It may seem like a strange move for Amazon, yet here we are: the year is 2016 and everyone’s favorite online shopping website has joined the competitive engine scene, duking it out with the likes of Unity, Unreal Engine, and of course, Game Maker / RPG Maker. Who will come out on top? No one, most likely, but that’s fine. This isn’t some silly “in it to win it”, where only the most popular will be used. Not by a long shot.

That and, for all intents and purposes, Lumberyard does carry the infamous ‘beta’ tag still, meaning Amazon’s not entirely done tweaking and tuning its finer aspects. Seems quite solid to me in its current form though, what with its fancy-pants Twitch integration and robust multiplayer feature set and all, easing many otherwise mind-boggling tasks. If you’ve ever tried to create an in-game news feed, messaging system or something similarly cumbersome, you probably know what I mean.

Speaking of features… given the popularity of mods these days, it’s hardly going to surprise anyone that Lumberyard is mod-friendly right out of the box; provided you tick off the right, well, boxes. Seeing how this can easily extend the lifespan of a game significantly, as it gives players access to virtually the same tools used to create the game itself, there’s rarely a reason not to include it. But as always, to each their own.

Be sure to check out the official Amazon Lumberyard site for the complete what’s what, and as always, happy game-making!