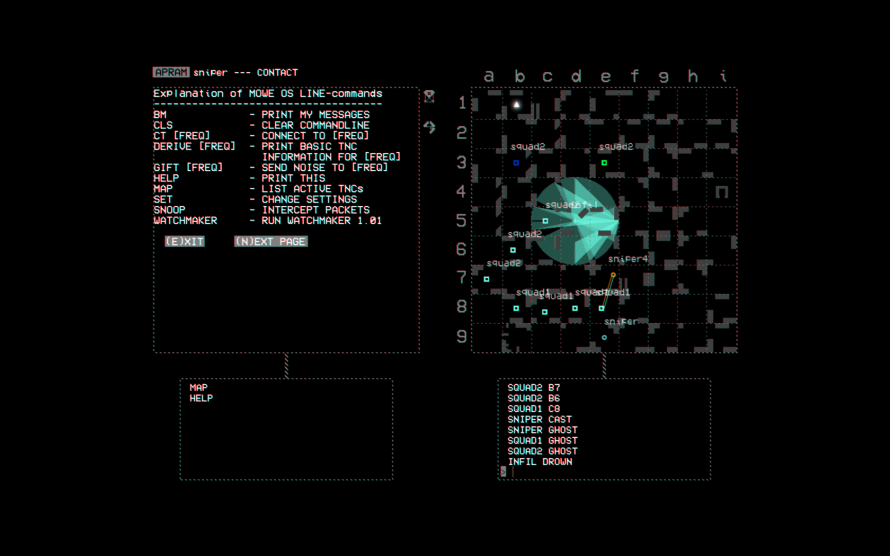 Somewhere, at some point in the 20th century, war is being waged in A Winter’s Game… from a concrete nest. Or rather, orders are given from said nest -- the actual army, however few in numbers, is out there running and gunning the best they can. All while you sit safely in said area, barking orders by way of a command line interface. How’s that for mixing the old with the new?

As for exactly how it all handles, based on the trailer below, probably a bit like a game of chess, in that commands are typed and movement is grid-based. You know, “sniper1 D3”, “map”, and… uh, well, a lot of other orders were issued that I didn’t quite get. Like “watchmaker”, for example. It’s likely just some weird slang that’ll be explained properly during the game, but the gameplay showed here doesn’t make a lot of sense, even if the whole thing does look quite intriguing!

A Winter’s Game is a short cyberpunk real-time strategy set in a city, somewhere, at some point in the 20th century. You must fight your way through a war-torn city with just a handful of units. But don’t worry, you’re safe in your concrete nest.

Given the fact that you only have “a handful of units”, it should come as no surprise that each skirmish is tagged as supposedly lasting around 30 minutes, perhaps longer depending on playstyle. We’ll see what happens when A Winter’s Game is released in the not-too-distant future, which’ll hopefully be sooner rather than later. Until then, be sure to check out the trailer and dev diaries on IndieDB.