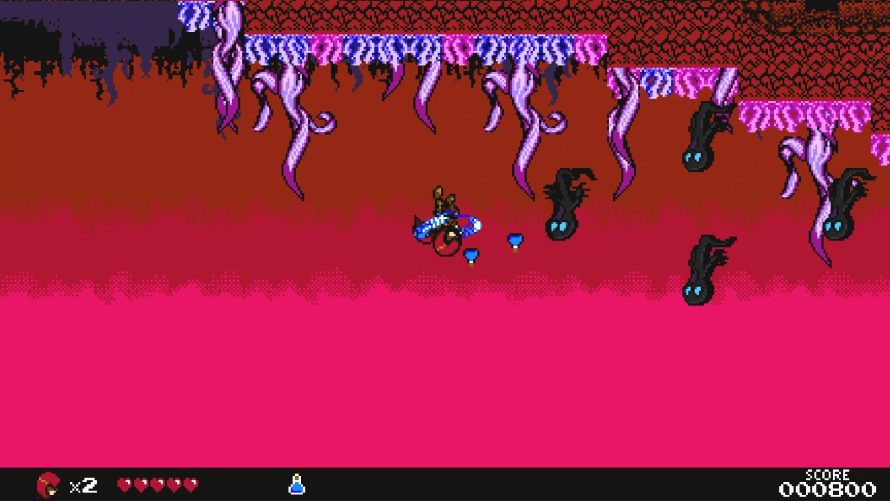 At some point, in the distant future, monsters will no longer invade and heroes will become obsolete. But since A Hole New World looks pretty darn awesome, it’s a good thing that we’re not quite there yet. Whether or not the protagonist, being a ‘Potion Master’ of all things, will be able to actually vanquish the baddies from the Upside Down World (wait, what?)… remains to be seen. One thing is certain, though: A Hole New World has some awesomely chippy tunes!

But before we get to that, or the incredibly groovy old-school art style, pray tell: do you remember Ludum Dare 30? Probably not, as it did take place way back in 2014, but that is where A Hole New World actually came to be. At first. It’s obviously changed a lot since, finding success on both Greenlight and Kickstarter in 2015, and now… Mad Gear is ready to unleash their NES inspired beast upon the world, potions and all. Well, almost. Still a few weeks left, but hey, May 19, 2017 is closer to the present than 2015… was. Back then. Or something.

Jump and shoot like they did in the good ol’ arcade days. Fight enemies in your world and in the Upside Down World! Defeat gigantic bosses and acquire their powers!

Right. Anyway, potions, and fairies too! Or just one in this case -- Fäy, your trusty companion. As for exactly what this wee thing will be doing to help ya out, well, that remains to be seen. I suspect it has something to do with how players will be able to acquire new powers as they work on kicking the ass of evil -- both here and in the Upside Down World! So two worlds, one would-be hero (and his fairy), and a crap ton of demons to vanquish. Oh, and some of them -- as can be seen in the trailer below -- are of the ‘oversized boss character’ sort, because no 2D old-school title would be complete without those. And potions. Potions!

A Hole New World will be available come May 19, 2017, from Steam and on Xbox One/PlayStation 4.

Update: minor typo -- PS4 version won’t be out until sometime this summer.