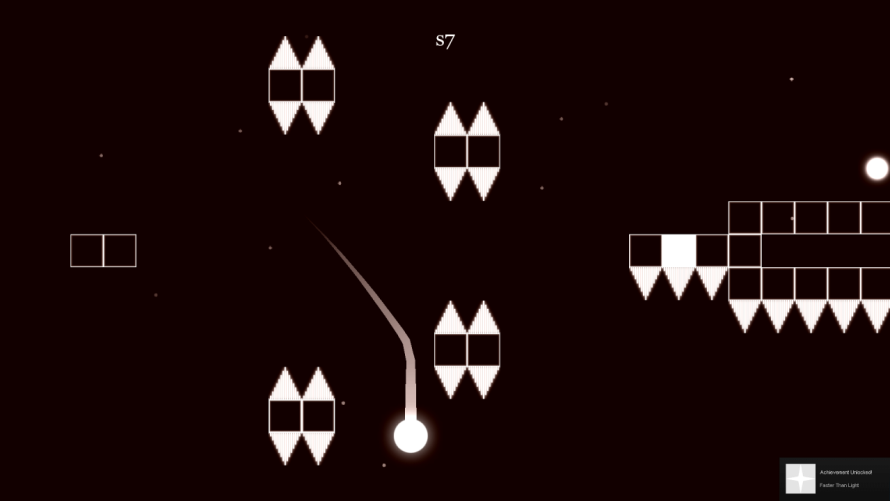 Since the dawn of time, eventually, the Moon is required to give way to the sun. That’s just the way it is, and that’s not about to change. Although in the case of 6180 the moon, the sun is gone! But… gone rogue, gone missing, or simply gone? Well, anyway, whatever the case, your job – as the Moon – is to find out what happened, and hopefully bring the sun back, restoring the natural order of things.

Crazy plot? You have no idea, and it only gets weirder as the game progresses, with bits of dialogue here and there, planets exchanging brief moments of communication. Ever wanted to play a game in which you got to talk to Mercury or Venus? You’re in luck then! Or how about one that lets you jump right through the screen, borders be damned? Yup, that too. Looking for something low-fi, yet stylish, with groovy music in the background? Done, done and done.

That said, not gonna lie, 6180 the moon does have a bit of a learning curve, what with its screen-warping mechanics and all. Nothing steep, but chances are you’ll spend a good portion of the early levels constantly crashing into spikes before getting the hang of controlling the little ball that represents the Moon. Levels are relatively short though, and checkpoints aren’t far between, so it’s not as if the game itself is extremely challenging – at least, not until you reach the later ‘worlds’.

See, initially, all you have to deal with is gravity, spikes, and getting to the circular exit. No problem. Then, little by little, the game introduces new things, ramping up the difficulty while at the same time, adding a touch of puzzle platformer to the mix. That and some serious reflex testing, as some levels have you traversing crazy stuff like temporarily disappearing, unstable, and even constantly moving surfaces! Oh and then there’s the ‘power-up’ pick-up, which lets you press a button to drop the ball (or the Moon, rather), triggering a free-fall as it were. Bit of a double-edged sword, seeing how this can just as easily save you, as it can send you on a direct collision with, well, spikes.

But again, checkpoints and short levels make the experience much less stressful than it could have been, really. I have a history of rage quitting challenging platformers, and yet, I actually made it through this one, start to finish. Didn’t hurt how everything is coated in a low-fi, minimalistic art style, of course, as that stuff is right up my alley. Or that its soundtrack features varied, genuinely groovy melodies, ranging from sweeping to rhythmic beats, accompanying the Moon on its journey.

All in all, I’d say the 6180 the moon is an easy recommendation, even for those who aren’t huge platforming fans. It’s easily accessible, fun, void of pointless filler has tight controls and a stylish look. Also, did I mention how it’s actually really good?